Hard-fought, quick-paced, spectacular: Wheelchair basketball incites a unique fascination all its own. It is based on a very special cooperation concept resulting from the wheelchair as a sporting device and the unusual constellation of the team. It can be experienced firsthand at a Bundesliga match of the RBB Munich Iguanas playing against the BG Baskets Hamburg.

Laura Fürst reacts quickly to loss of the ball. She swings her wheelchair around, picks up speed with a few powerful arm strokes, and is back in her own zone defending the basket in a flash. Her team, the RBB Munich Iguanas, are already nine points behind the BG Baskets from Hamburg in the third quarter. At the mid-court line, she collides with a teammate and tumbles over along with her wheelchair. Lying on her back, she can’t scramble back into the chair on her own. Two teammates roll up from behind, each grabbing an outstretched arm to pull Laura up.

Scenes like these are part and parcel of this dynamic sport, but they also stand for values that are important in wheelchair basketball, perhaps more important than in other team sports: cooperation. Wheelchair basketball is the ultimate team sport; only working together can you win a game. At first glance, the teams appear to be inhomogeneous, with women and men, non-disabled and disabled persons with various limitations all playing on the same team. An ingenious point system (see box on the right) ensures that the playing level of the five court players is comparable with that of their opponents. “One can do this better, the other can do that better,” says Florian Mach. On this Saturday in December, he is playing on the Iguana squad as one of three non-disabled players, referred to as pedestrians. His girlfriend, Laura Fürst, is the only woman. “Everyone has to work for everyone,” says the 27-year-old, who won silver with the German wheelchair basketball team at the 2016 Paralympics in Rio de Janeiro.

The basket in his sights: Florian Mach has positioned himself well. 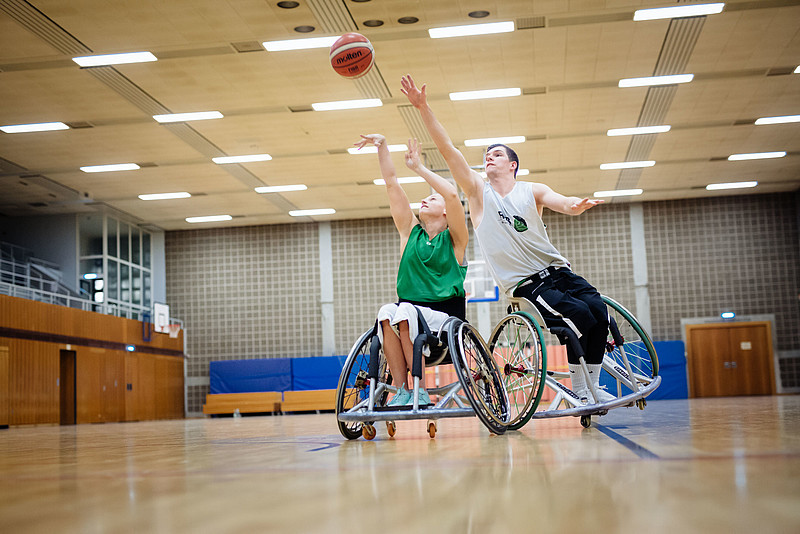 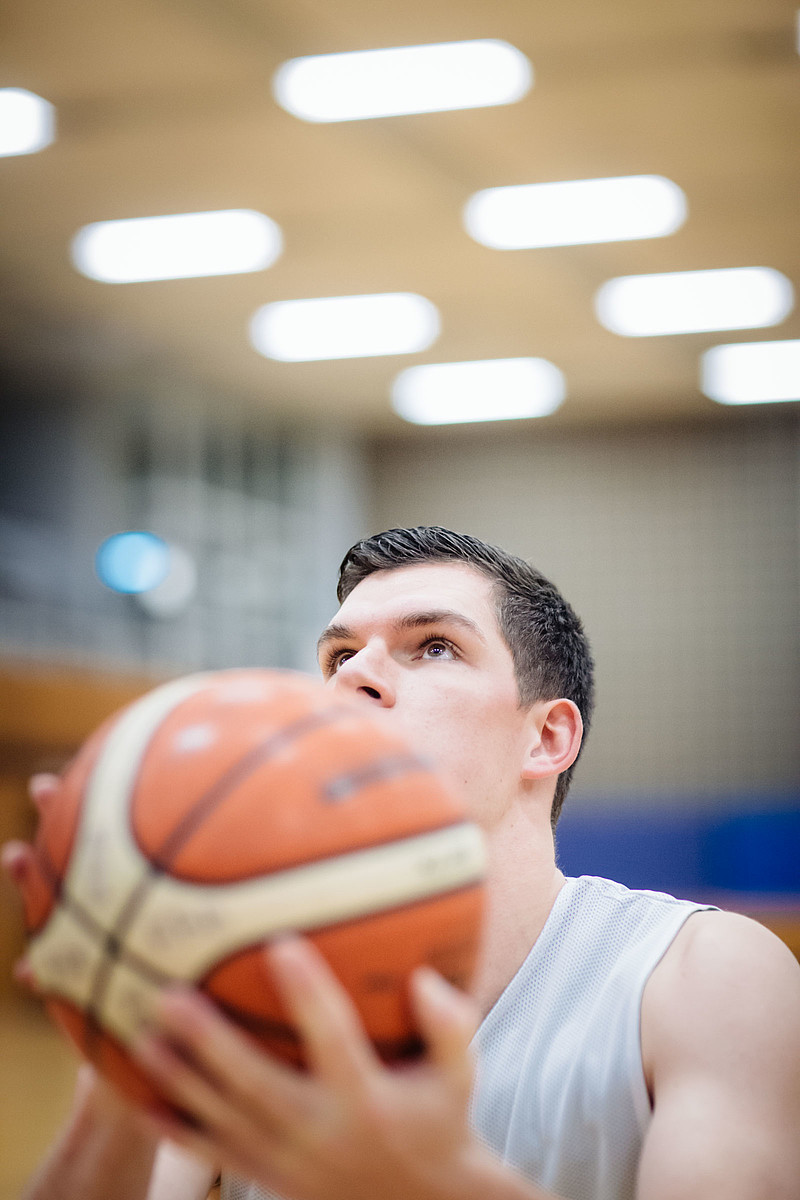 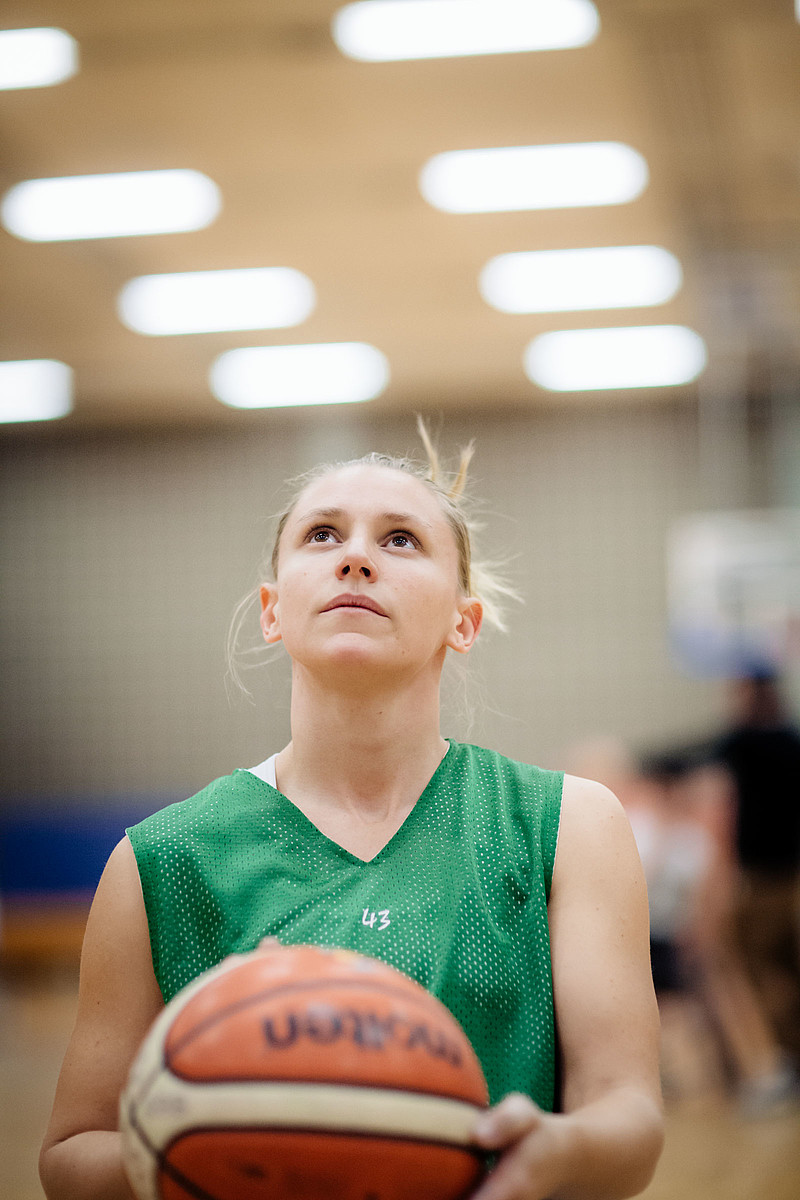 The Munich players are outsiders in the Bundesliga match against the strong Hamburg team, but for now they are holding their own. They win the first quarter 13:12 thanks to a cohesive team performance. Because the wheelchairs make for smaller gaps and the players are less agile than in pedestrian basketball, team play is even more crucial. “We have to function as a collective,” says Florian Mach. Laura Fürst succeeds in blocking again and again, thus preventing taller opponents from shooting the ball. She is not bothered by the fact that she rarely takes a shot at the basket herself and has only scored two points for her team in this game. “Everyone has their role in the team,” she says. Scoring points is someone else’s job.

“CHAIR SKILLS” IS ONE OF THE DECIDING FACTORS

Fürst has been partially paraplegic for some ten years now. On a high school exchange program in Michigan in 2008, she crashed into a tree in the woods in a snowmobile accident. She had previously played tennis and volleyball, but tried out wheelchair basketball during her rehabilitation at the hospital in Murnau. “I fell in love with the sport,” she admits – and later she also fell in love with Florian Mach. The 22-year-old came to the Wednesday group of wheelchair basketball players because of his father, who works as a sports coordinator at the Murnau hospital. The sport that is “simply a great mix” enthralled him too. On the one hand, there is this unusual diversity within the team, he says. On the other hand, Mach is fascinated by “being able to constantly develop his skill in handling the sporting device further.” These “chair skills” are part of the training, along with basketball-specific tactics. Mach, as a pedestrian, had a disadvantage in the beginning when compared to his teammates, who are also wheelchair dependent in their daily lives and therefore learned the abrupt changes of direction and the coordination of the device and ball more quickly, but now he has a good handle on all of these skills.

After halftime, the Iguanas lost their momentum, the team from Hamburg pulled away, and in the end the score was 77:60 for the guests, who came to Munich occupying third place in the standings. “Up front, we just didn’t play with our heads in it and didn’t repeat the things that worked,” says coach Benni Ryklin afterwards. You can see the disappointment written in Florian Mach’s face after the end of the game. He seeks consolation from his family first and distances himself somewhat from his teammates. Even in a well-functioning team, sometimes a little distance doesn’t do any harm. 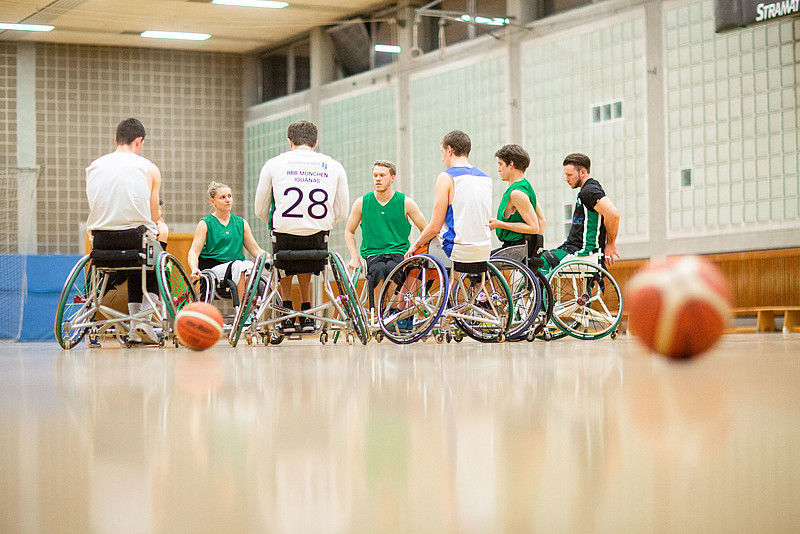 Laura Fürst at the team meeting: Team tactics are even more important in wheelchair basketball than in pedestrian basketball.

Tumult of wheelchairs: A rough-and-tumble struggle for the next basket. 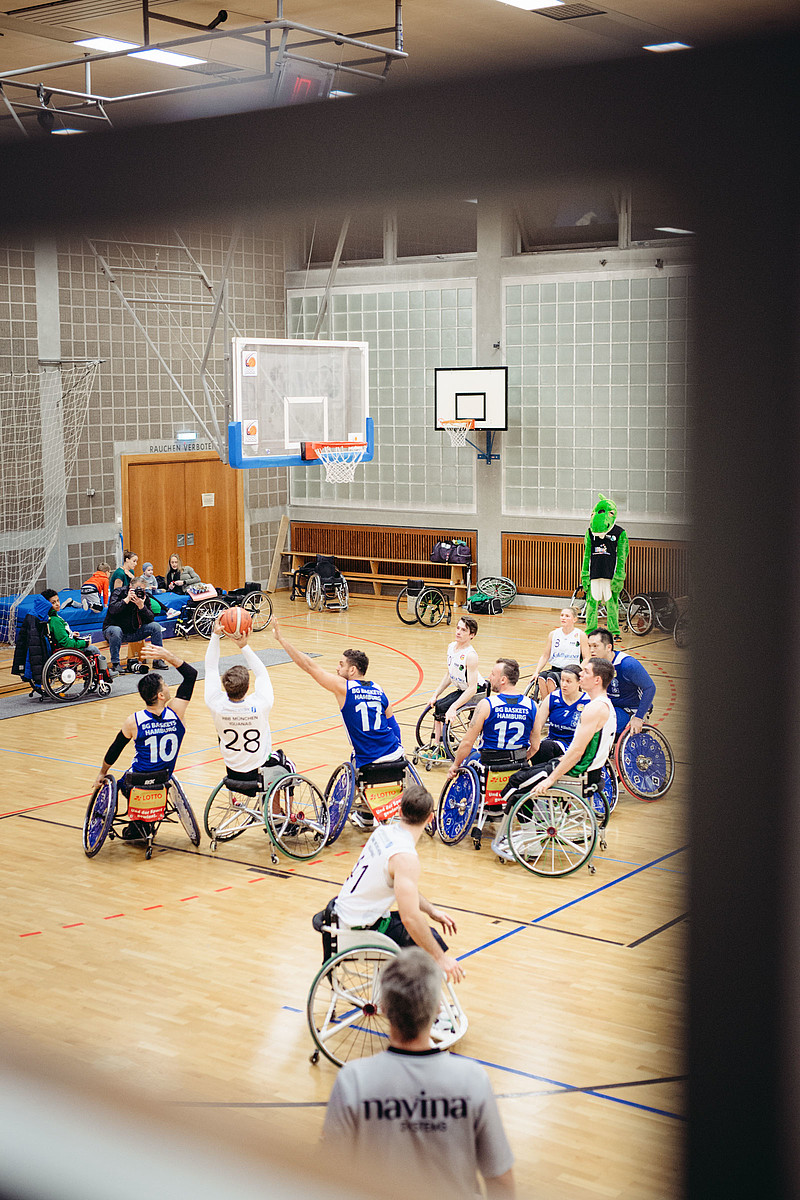 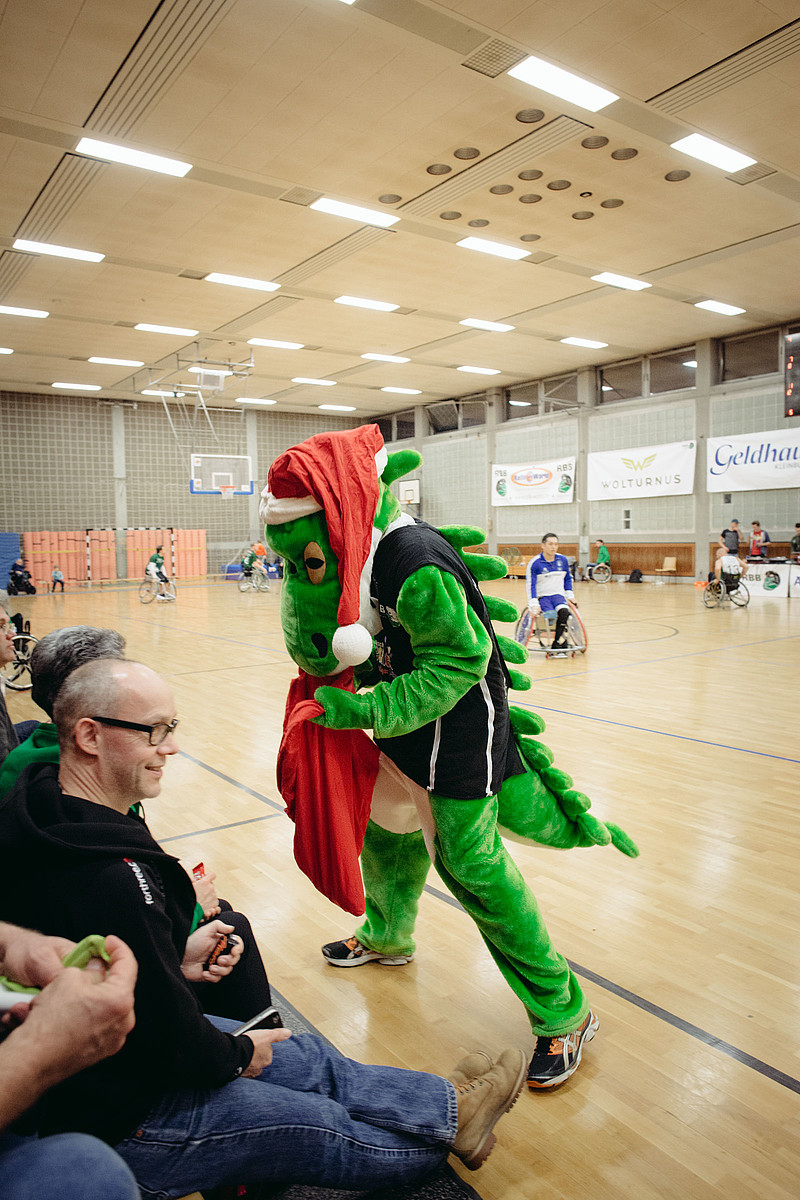 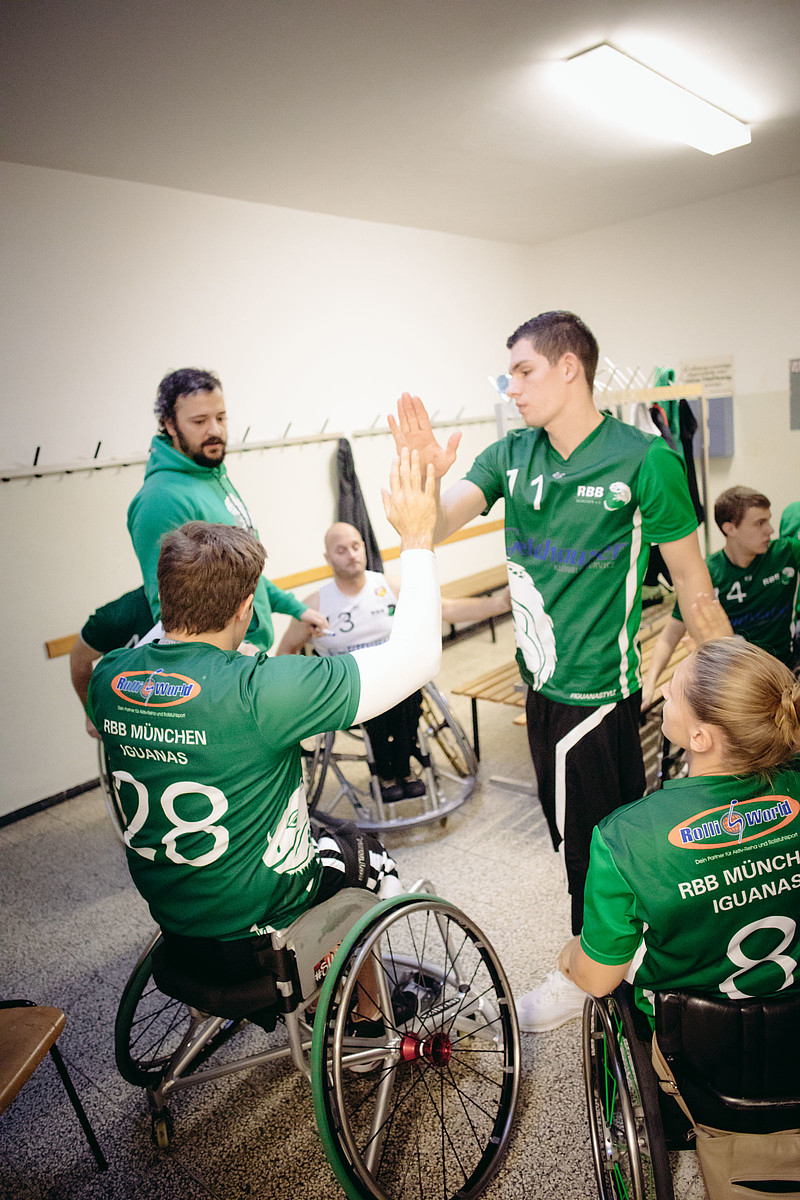 TEAM-BUILDING AS AN ARITHMETIC PROBLEM

In order to create a balance between the different degrees of disability in the teams, each player in a team is assigned a value between 1.0 and 4.5. The official term for this is “functional classification.”

Players with extreme handicaps receive the lowest score, since their play is restricted by an unstable trunk and their lack of balance in the seat.

3-point players have a leg amputated above the knee, for example. They have excellent trunk control during play.

POINTS ARE ALSO GIVEN TO THE NONHANDICAPPED

Women receive a general point deduction of 1.0 or 1.5 points. As a consequence of this, they can also have a negative value.

Among the crucial factors in the functional classification is the player’s ability to wheel and steer the wheelchair. 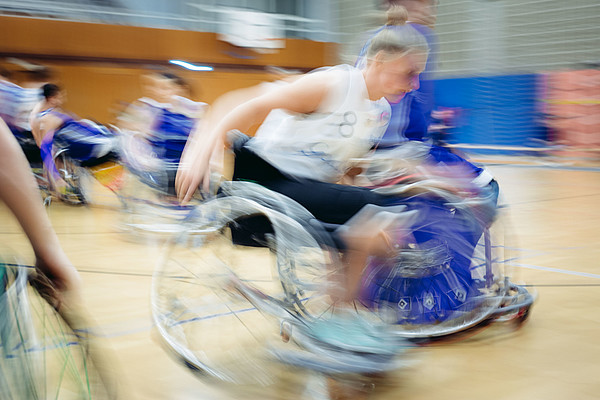 Further criteria are capabilities in shooting, passing, rebounding, and dribbling depending on the degree of disability. The assigned point value is entered onto the player card. 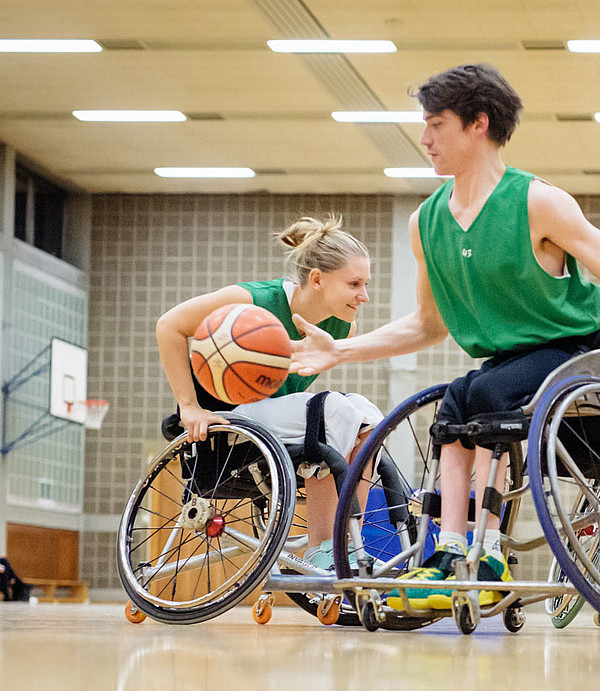 In total, each team is usually allowed 14 points on the court, which gives the coach a little arithmetic problem to do every time they change out a player. 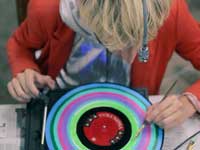 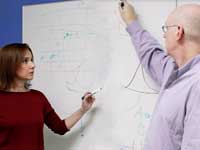